Gabriel (boy) with Bartók and Zathureczky, seated on either side of his mother, the hostess, April 1936

Banat with Milstein in Lewisohn Stadium, 1951

With Casals at the Marlborao Festival, 1961 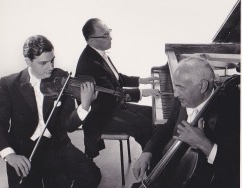 Portrait of Bernstein with dedication “To Gabriel”, photo by Banat

Aaron Copland on his 80th Birthday, celebrated by Banat and his Westchester Conservatory Orchestra

Performance of Beethoven’s 9th Symphony with his orchestra, vocal soloists and the Westchester Choral Society. 1980

Masters of the Violin, a six volume series of facsimiles of XVII and XVIII century violinist composers HBJ, 1982

Volume of facsimiles of original manuscripts of Mozart’s violin concertos, published by Banat in 1986